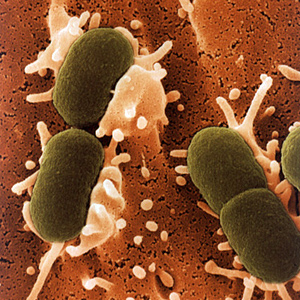 Escherichia coli is one of the Enterobacteriaceae family of bacteria, which is composed of a number of genera of gram-negative bacteria. Morphologically coliforms are just rods, which are mostly flagellated peritrich and therefore movable. You can multiply both under aerobic and anaerobic conditions and can easily be cultivated on simple nutrient media. Glucose, lactose and other sugars are degraded , whereas urea and citrate can not be recycled. Hydrogen sulfide is not formed. The growth range is between 4 and 46 ｰ C. Like all Enterobacteriaceae E. coli are resistant to surfactants.

The complex antigen structure is based on o- , K- , and H antigens. The O- antigens as lipopolysaccharides (LPS) constituents of the outer membrane structure . A different chemical structure of the LPS corresponds to a different serological specificity. O- antigen possessing strains of bacteria develop on solid culture media shiny colonies , they are therefore referred to as S- shapes ( engl. smooth ) . In the K- antigens is the capsule substance . However, not all strains carry K- antigens. Strains with this antigen structure are generally toxic and resist rather phagocytosis . The colonies of bacterial strains with a lot of capsule substance look slimy. The Scourge proteins represent the H antigens 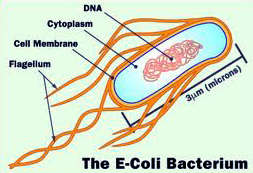 There are optional distinguish pathogenic and obligate pathogenic strains . The facultative pathogenic strains are part of the physiological intestinal flora and can cause infections if they enter from the intestine into corresponding regions of the body . An important group responsible for the adhesion of bacterial components are the fimbriae ( pili ) that cause hemagglutination in vitro and can be divided into two types. In type 1 fimbriae hemagglutination is inhibited by mannose. These strains are thus mannose - sensitive, while strains with type -2 fimbriae are mannose - resistant. When the tribes of the physiological flora to strains found predominantly with type 1 fimbriae .

E. coli is the most common cause of urinary tract infections. These are either limited to the lower part of the urinary tract (urethritis, cystitis) or also collect the renal pelvis and the kidney ( pyelonephritis, Zystopyelitis ) . Lower urinary tract infections are usually caused by strains with mannose - sensitive fimbriae , while pyelonephritis is caused by strains with mannose -resistant fimbriae . E. coli is responsible for about 15 % of all nosocomial bacteremias . Other diseases caused by E. coli are appendicitis , infections of the gallbladder and biliary tract , meningitis , peritonitis , wound infections and gastroenteritis.

The obligate intestinal pathogenic strains do not belong to the physiological flora . A distinction is made with regard to the pathogenesis and disease patterns between five groups: Enteropathogenic (EPEC ) , enteroaggregative ( EAEC ) , enteroinvasive ( EIEC ) , enterotoxigenic (ETEC ) and enterohaemorrhagic (EHEC ) E. coli strains . The transmission of the pathogen is usually done via contaminated food or drinking water . Virulence factors are different adhesins , secretory proteins , hemolysin , fimbriae and toxins. EHEC causes hemorrhagic colitis and approximately 5% of patients haemolytic uremic syndrome (HUS ), which is associated with renal failure , anemia, and thrombocytopenia. EHEC produce cytotoxins , called Shiga toxins because of their kinship with the exotoxin of Shigella dysenteriae type 1 . The most common charge of the HUS is serovar O157: H7. EHEC diseases are notifiable.

Diagnosis and prevalence of resistance

Optional pathogenic E. coli are diagnosed by culture of appropriate specimens and biochemical identification . In the diagnosis of urinary tract infection from midstream urine the number of bacteria must be determined. A bacterial count of> 105/ml speaks for infection. The detection of intestinal pathogenic E. coli is comparatively difficult. Here come cell culture assays , enzyme -linked immunosorbent assay and / or molecular biological methods are used. Serotyping remains specialized laboratories.

The prevalence of resistance in E. coli has deteriorated significantly in recent years in some cases . According to the resistance study of the Paul Ehrlich Society for Chemotherapy , the proportion of strains with ampicillin resistance participated in all examined E. coli isolates from 30.7 % in 1990 to > 50 % in 2004 . The most common cause of ampicillin resistance are beta-lactamases that are largely inhibited by beta-lactamase inhibitors . Simultaneously, the resistance frequency increased compared to other antibiotics. The increase in resistance to fluoroquinolones ( ciprofloxacin, levofloxacin , moxifloxacin , etc.) is considered particularly critical. In addition, an increase of ESBL - producing strains is observed (5.1% in 2004) . ESBL (extended - spectrum beta -lactamases ) are beta-lactamases , which also mediate resistance or decreased susceptibility to broad-spectrum cephalosporins ( cefotaxime, ceftriaxone , ceftazidime , etc.).

To calculated the treatment of acute uncomplicated cystitis in sexually active women age are trimethoprim ( TRIMONO others) , trimethoprim with a sulfonamide such as [ Cotrimoxazole ( Cotrim and others) ] , fluoroquinolones or fosfomycin trometamol ( Monuril ) , preferably as short-term therapy (within three days ) , recommended as a drug of choice. For the treatment of acute uncomplicated pyelonephritis come trimethoprim ｱ sulfonamide , the fluoroquinolones ciprofloxacin ( Cipro ) and levofloxacin ( Tavanic ), a cephalosporin group 2/3 [eg Cefuroxime ( ELOBACT etc.) or cefixime ( Cephoral etc.) ] , an amino penicillin plus beta-lactamase inhibitor [eg Coamoxiclav ( Augmentin , etc.) ] or an aminoglycoside into consideration. Other light E. coli infections can also be treated . In contrast, the use of carbapenems and piperacillin / tazobactam ( Tazobac ) the treatment of serious infections and reserved in case of failure of initial therapy remains . Infections caused by multidrug-resistant strains are treated according to antibiogram .

In the treatment of toxin -mediated gastroenteritis symptomatic treatment with fluid and electrolyte replacement is in the foreground . Antibiotics are indicated only in exceptional cases.

Antibiotics are active against the Escherichia coli